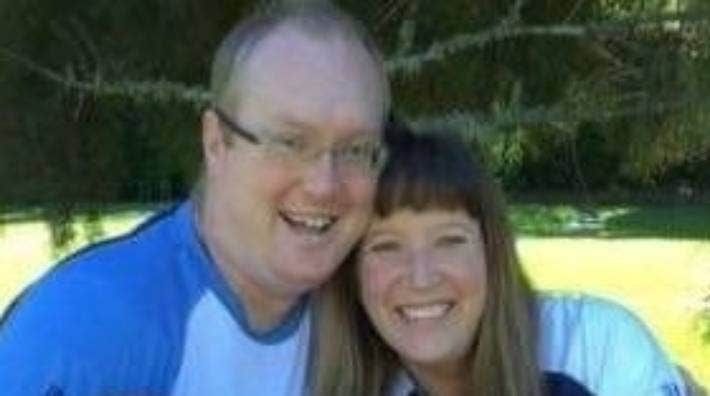 SUPPLIED
Richard Whitham and wife Erika Whitham were under financial strain when they abruptly left New Zealand in May 2018.

This month, Kiwi dad Richard Whitham was sentenced to 38 months’ jail by a Singaporean judge after pleading guilty to serious fraud charges. For prosecutors, the 42-year-old’s admission brought to an end a three-year legal ordeal. Yet major questions continue to dog Whitham and the millions of dollars entrusted to his care. Aaron Leaman reports.

The early months of 2018 were a stressful time in the Whitham household.

Having fallen behind with personal loan repayments, and with unpaid bills mounting, Richard and Erika Whitham’s​ finances were under serious strain.

Letters urging them to pay unsettled debts were turning up at the Whithams’ rented house in Hamilton’s middle-class Flagstaff suburb. A letter from one finance company informed the Whithams a default had been placed on their credit file, possibly affecting the couple’s ability to get credit for the next five years.

Faced with ballooning debt, and with few savings to their name, the Whithams made a bold play.


At 3.39pm on May 17, 2018, the couple purchased first-class airline tickets for themselves, their four young children and Erika’s mother, Elisabet van der Merwe,​ at a cost of $24,970. The family then boarded a Malaysia Airlines flight later that night at Auckland Airport and flew to Singapore.

Richard and Erika say the flight was part of an intended 10-day holiday and business trip. The trip included a stay at Sentosa, an island resort off Singapore’s southern coast. 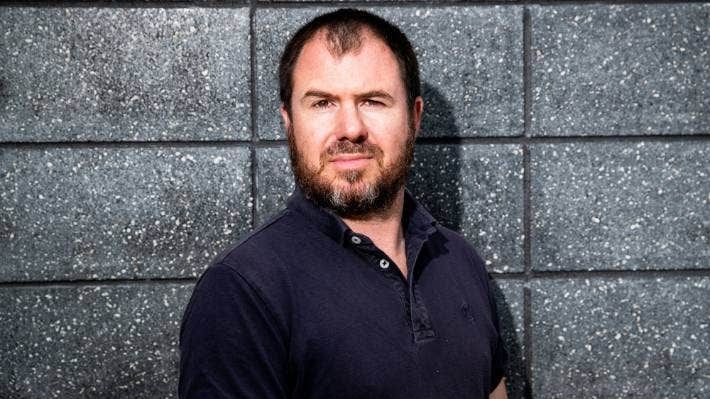 The good times enjoyed by the Whitham family, however, were in stark contrast to the angst and confusion engulfing Hamilton-based finance company Worldclear – Richard Whitham’s employer – over those same few days.

Shortly before the Whithams flew to Singapore, Worldclear staff discovered they couldn’t access about $4.5 million kept in bank accounts operated by Whitham. Unable to reach Whitham, and fearing the worst, Worldclear’s managing director, David Hillary,​ went to Hamilton police about midday on May 18, 2018.

"They said, he’s already out of the country," Hillary recalls.

"I was in disbelief. The shock of how serious this was hit me in terms of, okay … the business is finished, it can’t operate, and it’s not solvent. This was going to have bad effects not just on me, but for Richard, for Richard’s wife, for his kids, for his mother-in-law, for my family, and for Worldclear’s employees."

Whitham was hired by Hillary in August 2017 to establish relationships with banks.

Worldclear found it difficult establishing and maintaining relationships with the main trading banks in New Zealand. Hillary says banks considered financial service providers operating in the remittance sector at risk of being unwittingly used to launder money. Whitham later became a director and shareholder of a new company, T1 Holdings,​ which was set up to open bank accounts and conduct financial transactions on Worldclear's behalf.

"He never really put a foot wrong as far as we were aware. He was careful, competent, but lazy. He spent a lot of time on news websites and doing other stuff he shouldn’t have been doing during work time." 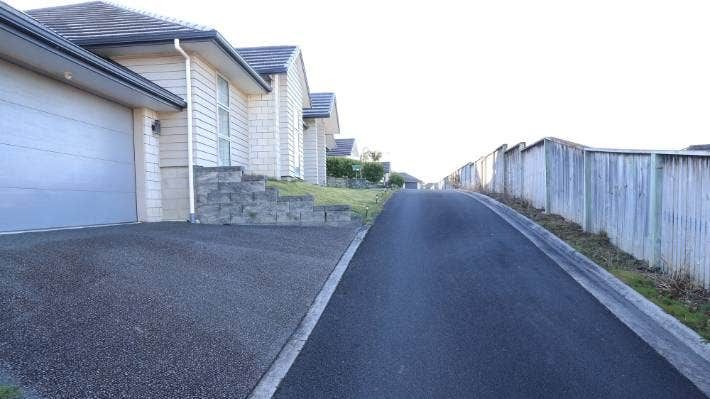 MARK TAYLOR/Stuff
The Whitham family rented a house on Hamilton's Clewer Lane prior to their departure to Singapore in May 2018.

On the same day he contacted Hamilton police, Hillary logged into Worldclear’s computer system and noticed Dropbox files used by the company were being changed. The operator was using a Singaporean IP address and had logged into the systems using Whitham’s password. The user was systematically deleting files from Whitham’s folders, including documents relating to bank accounts Whitham had set up in T1 Holdings’ name.

Whitham was arrested by Singapore Police on June 4, 2018, and charged with seven counts of criminal breach of trust. Two days later, New Zealand Police issued a warrant for Whitham’s arrest on a charge of theft by a person in a special relationship.

Yet rather than deport Whitham back to New Zealand, Singaporean authorities opted to prosecute the father of four. Whitham was originally granted bail but was taken into custody when he couldn’t afford his bail bond. He would go on to spend the best part of three years in custody waiting for his day in court.

Last week Whitham appeared in front of a Singaporean court for what was set down for a three-day judge alone trial. But by day two the hearing was over, with Whitham pleading guilty to three charges under Section 47 (1)(b) of the Corruption, Drug Trafficking and Other Serious Crimes (Confiscation of Benefits) Act.

Singaporean court officials have yet to release the judge’s sentencing notes, saying only that Whitham was sentenced to 38 months’ jail. His jail sentence takes effect from March 5, 2019, meaning he could be released from prison by early 2022.

Hillary is waiting to be informed about the exact scope of offending Whitham has admitted to.

"I really don’t have any reaction at this stage because I just don’t know what happened at court," he says.

"As far as I understand, there seems to have been some kind of plea deal that’s gone down, and I’m interested to find out exactly what the deal was."

In his search for Whitham, Hillary went to the family’s Flagstaff rental and found people who told him they’d recently bought household furniture from Erika.

Hillary took away several bags of rubbish from the address and found, what he says, were vital clues about the Whithams’ plans for a new life. 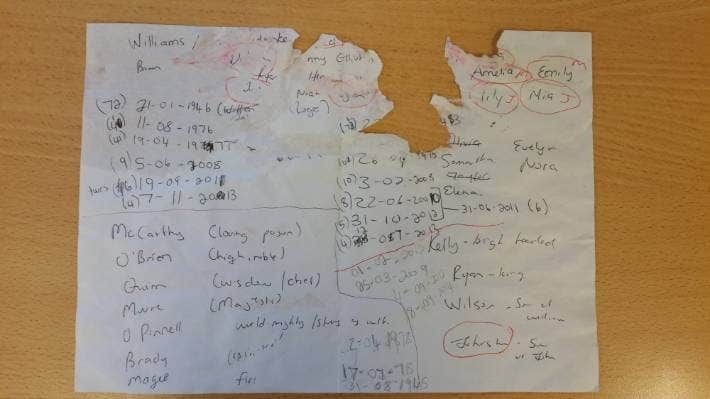 SUPPLIED
A handwritten note found at the Hamilton address of Richard and Erika Whitham. The note, understood to be in Erika’s handwriting, allegedly shows alternative names and dates of birth for Whitham family members.

A note in Erika’s handwriting appeared to show her devising new names and dates of birth for family members. Among the rubbish was also a business card for a Hamilton wig shop. Staff there would later confirm that Erika’s mother had visited the shop and made inquiries about buying a wig. She told staff she didn’t have the money to pay for the $575 wig but would soon receive some funds.

A forensic examination of Whitham’s work computer discovered he had been searching online for countries that didn’t have extradition treaties with New Zealand.

A raft of New Zealand court proceedings have found against Whitham in his absence. He has been declared bankrupt, with his various companies put into liquidation.

New Zealand Police declined to say whether they will seek to have Whitham deported to New Zealand upon his release from prison, citing "privacy regulations". Whitham holds dual New Zealand and Australian citizenship and flew to Singapore on his Australian passport.

Getty Images
Richard Whitham spent the best part of three years in custody in Singapore after he was arrested by police on June 4, 2018.

Where to next for the Whithams?

Speaking to Stuff in late 2019, Erika Whitham indicated her husband would consider a plea deal if it meant he could be reunited with his family more quickly. In February this year, Erika contacted Stuff and offered "exclusive rights to Richard[’s] story and ALL the other juicy bits we have" in exchange for $5000 to $10,000. Erika said the money would be used to pay lawyers in New Zealand to prove her husband’s innocence. Stuff declined the offer.

Of the $4.5m taken by Whitham, $2m has since been recovered. Hillary estimates he’s spent $1.5m on legal and professional fees pursuing Whitham.

Asked if justice has been served, Hillary says the jail term served by Whitham is "a bit light" given the amount of money he stole.

"In terms of what I wanted, it’s not any more lenient than what I wanted. I don’t want to see people in jail even when they do stuff like this. I just would like to see them [the Whithams] take more responsibility in terms of their financial affairs and dealings."

No news is not good news, Waikato

Big things are happening in the mighty Waikato, and you need to know about them. Whether it's the next new bridge, theatre or big housing build in our growing region, Stuff's Waikato reporters are there to tell you about it while not losing sight of where we've come from.

Our newsroom has 150 years of local knowledge and we think everyone should be able to tap into it.

That's why Stuff's reporting on the big Waikato stories is accessible to everyone. If you'd like to support that, please make a contribution today.