More bad news for the uFun Club faithful, with Thai police at a press-conference today estimating that a staggering $1.17 billion USD has been lost in the scheme.

Some of that money will have been withdrawn by early investors, $7.7 million has been seized by Thai police but the rest of the funds remain unaccounted for.

It is believed uFun Club management have laundered the funds offshore, but where is currently a mystery.

people who were victims of the pyramid scheme to file complaints with police.

Any monies recovered would be distributed on a first come, first served basis.

This is markedly different to typical Ponzi recovery processes, which see all victims who filed claims accounted for before seized funds are disbursed.

Given the uncertainty of whether or not Thai police will be able to locate and freeze the rest of the staggering amount of funds uFun Club stole from investors, a scenario very much exists now where they might run out of funds to compensate Thai victims of the scheme.

At present some 110 uFun Club investors have filed complaints, with ‘about 400 police officers (having been) assigned to receive complaints nationwide.‘

Investors in other countries meanwhile remain in limbo. As I understand it no other country has yet to take regulatory action against uFun Club, with no claims processes existing outside of Thailand.

A particular spotlight is being shone on Malaysia, which where the bulk of uFun Club management are believed to be currently hiding out.

In the midst of ongoing investigations into possible Chinese origins of the scam, Thai police are currently claiming that ‘Malaysians had initiated the scam‘ but operated it out of Thailand.

Suriya Singhakamol, director of the Bureau of Technology and Cyber Crime, said 20 Thai and foreign suspects were facing arrest warrants.

They were key founders of the pyramid scheme and each of them had changed their names 3-5 times.

Whether or not Malaysian authorities move in to arrest local ringleaders and uFun Club global management remains to be seen.

The latest from the uFun Club camp has seen the promise of a press-conference to be held in Malaysia sometime tomorrow.

US uFun Club investors meanwhile, are attempting to censor the internet of information critical of the scheme.

The following was recently posted to a uFun Club investor group who refer to themselves as "uFun Dominators": 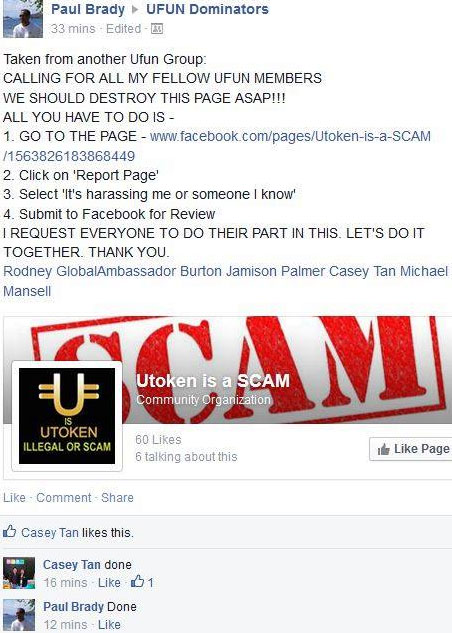 Casey Tan, Paul Brady, Rodney Burton, Michael Mansell and Jamison Palmer are believed to be ringleaders in attempts to recruit US investors into scheme.

The Facebook group they are urging their downlines to report has been publishing information critical of uFun Club over the last few days.

According to other reports on social media, uFun Club’s fugitive management have offered to fly Thai reporters out to the event for free.

At the event they hope to explain to the reports how uFun Club is not a Ponzi scheme.

Thai police appear to have confirmed this as legitimate news, with Songmeta suggesting

Thai reporters to attend press conferences on the issue in Malaysia to acquire information for Thai police.

He said there were free air tickets for the purpose.

With over a billion dollars unaccounted for, investors around the globe starting to ask where their money is and talk of abandoning the uToken cryptocurrency facade for straight investment into Ponzi points, no doubt the proposed conference should be a hoot.

Armed with information they believe proves uFun Club isn’t a Ponzi scheme, why management don’t just jump on a plane to Thailand and explain the situation to local police is unclear.

Email (will not be published) (required)